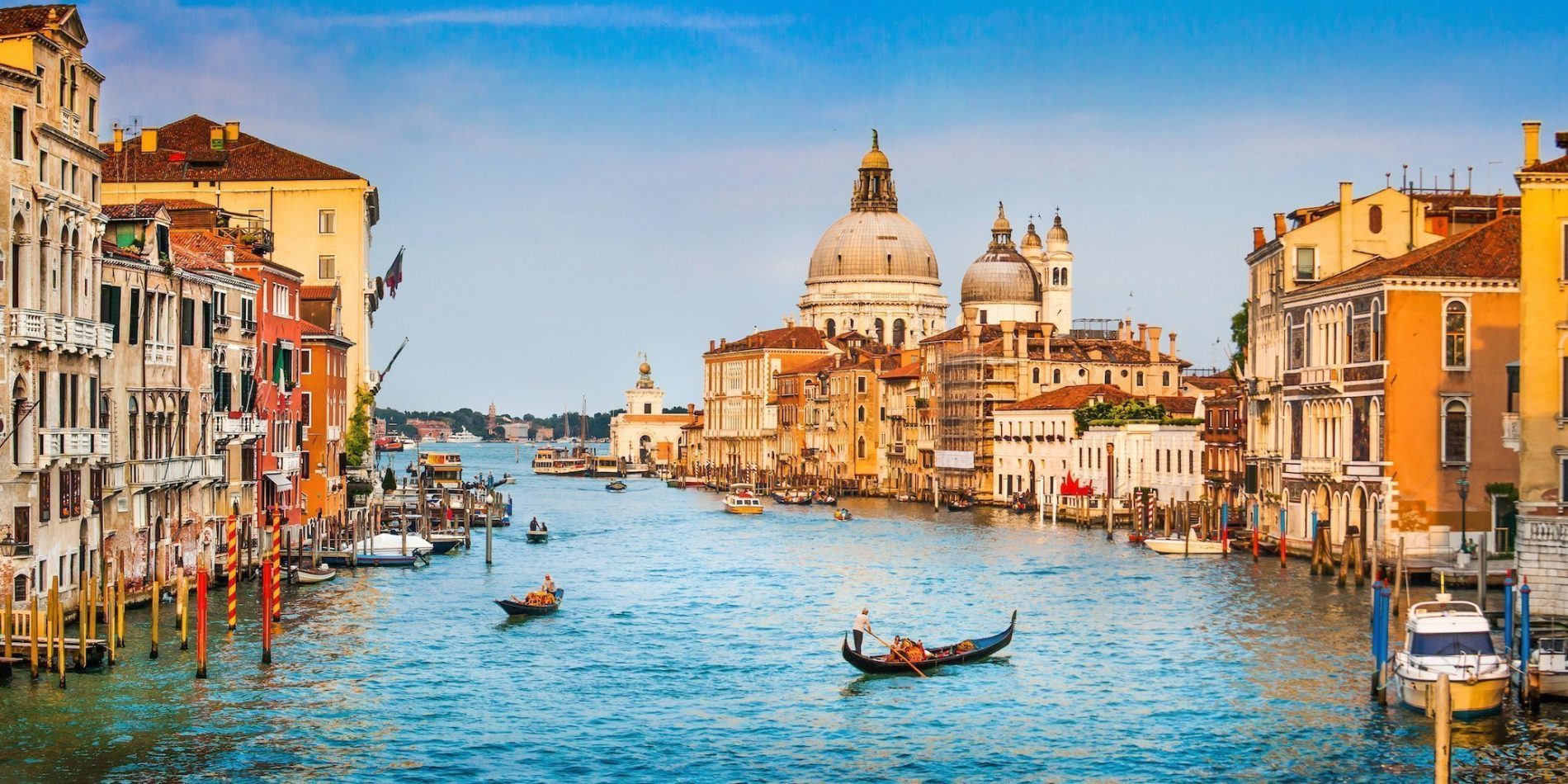 Explore the Grand Canal, the most unique "street" in the world, on board a luxury motorboat, with a small group and an expert guide, to enjoy a completely different perspective of the city of Venice. Admire the historic buildings, the bridges, the splendid facades of the noble palaces and immerse yourself in the dreamlike atmosphere that only Venice is able to offer. 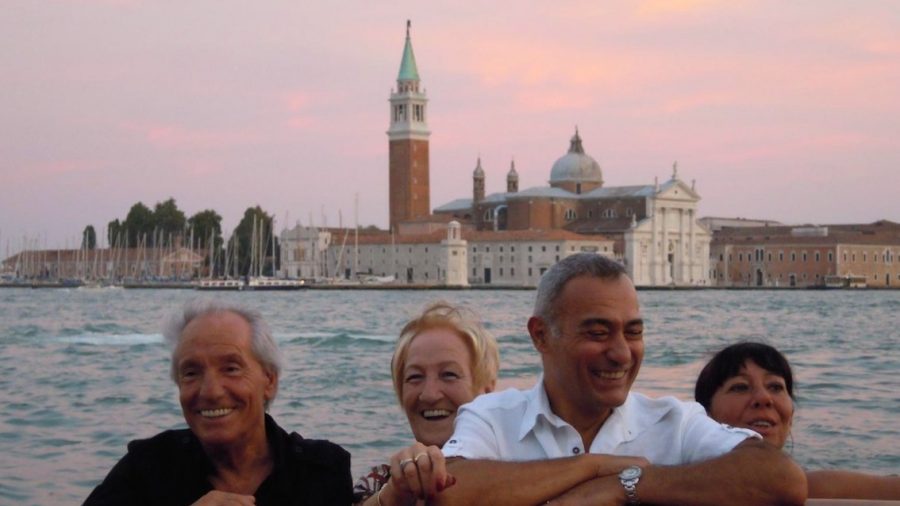 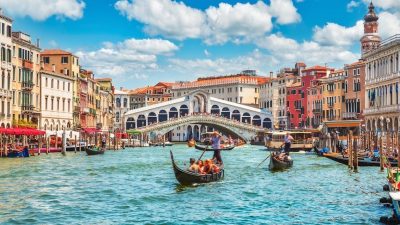 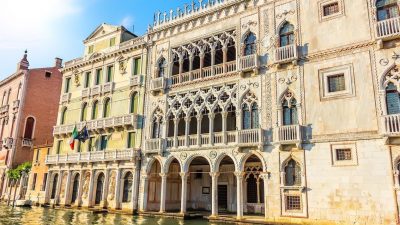 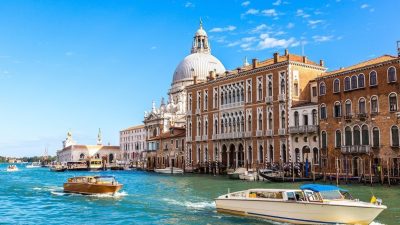 Venice is a city built on water, and the Grand Canal, or the “Canalasso” as called by the Venetians, is its bustling main street. Lined with sumptuous palaces and crowded with gondolas, water taxis, fire and ambulance boats, and vaporetti (public ferries), this thoroughfare is a feast for the senses. Explore the Grand Canal with a small group tour on a luxurious motor boat and a licensed guide and enjoy a completely different perspective of Venice.

Tour program of the Grand Canal boat trip with guide:

*This experience requires a minimum number of 4 travellers. There is a possibility of cancellation after confirmation if there are not enough passengers to meet requirements. If so, you will be offered an alternative or full refund.

The price does not include: Hotel pick-up and drop-off.

Maximum: 9 people on board.

How much does a guided tour in Venice cost?

The price of a guided tour in Venice can vary from 40 to over 100 euros per person, depending on the type of tour and the type of guide chosen. The cheapest are certainly the guided walking tours, but in this case there are two things to keep in mind: you will miss the main feature of Venice that are its waterways and you will have less time to visit the most important points of the city. A gondola or motorboat tour with a local guide, instead, allows you to fully enjoy the atmosphere that only a city like Venice can give you and to discover the hidden and less known Venice.

How long is a guided tour in Venice?

A guided tour in Venice takes from 40 minutes to an hour or more. Considering the opportunity to have a guide, it is preferable to choose a tour of at least one hour to get to know Venice without excessive stress. Compared to a classic gondola ride, the one-hour guided tour of Venice in a small and luxurious motorboat will give you more time to admire the beautiful Venice while sailing on the famous Grand Canal. If you wish to have more time to visit Venice, we recommend this: two-hour boat tour on the Grand Canal and historic districts of Venice.

Since Venice is a city built on water, it is crossed by 417 bridges built in stone, iron or wood, 72 of which are private. But there are 4 bridges that cross the Grand Canal, the largest and most famous canal in the city: Ponte di Rialto, Ponte dell’Accademia, Ponte degli Scalzi and Ponte della Costituzione. The best known is Ponte di Rialto with its 28 meters long and 22 meters wide which is one of the symbols of the city. In ancient times Ponte di Rialto was called Ponte della Moneta (Coin Bridge) to confirm the toll that had to be paid to ferrymen to pass from one point to another of the canal; then from 1250 it assumed its present name following the development of the Rialto market until its construction in stone in the VXI century. The Rialto Bridge was for 300 years the only bridge that allowed the crossing of the Grand Canal on foot until, in 1800, a bridge was built to connect the southern part of the Grand Canal on foot and where the Accademia Gallery was later built: Ponte dell’Accademia. Ponte degli Scalzi, on the other hand, was built to facilitate the route to the train station built in the mid 1800s; so also Ponte della Costituzione (also called Ponte di Calatrava in honour of the architect who built it) served as a link to the station of Santa Lucia.

What are the Venetians “fondaco”?

The “fondaco” are medieval warehouses, i.e. buildings that served as a warehouse for foreign merchants. Very common in the sea towns where trade was very flourishing, in the “fondaco” merchants were often obliged not only to deposit their goods, but also to dwell there. Venice in 1200 was part of the Republic of Venice and had a large number of products mainly from the East; so today there are many fondaco, also called fontego and all overlooking the Grand Canal, the main trade route of the city. The most famous fondaco in Venice is certainly the “Fondaco dei Tedeschi”, which is located next to Ponte di Rialto: its fame is also due to the beauty of its structure and for its facade it was once frescoed by Titian. The Fondego dei Turchi is also an important structure in Venice and overlooks the Grand Canal.

The Grand Canal overlooks many palaces (in Venetian Cà, i.e. house) with a portico directly on the water, an expression of Gothic architecture. Cà D’Oro, for example, is a beautiful palace that became the property of Baron Giorgio Franchetti at the end of the 19th century who undertook to restore it as much as possible to its original 15th century splendour. After his death Cà D’Oro, in which the Baron’s art collections were kept, became a museum as was his will. The name Cà D’Oro derives from the golden facades that covered the Palace to create a polychromy that has now disappeared and that represented the highest example of Venetian flowery Gothic. Still on the Grand Canal you will admire Cà Pesaro, Noble Palace of the Pesaro family which has also become a museum. The Gothic style facade has beautiful bas-reliefs to create a very special chiaroscuro effect. Continuing along the Grand Canal you will not fail to notice the Cà Foscari Palace: it is, in fact, a state University structured in eight faculties. Cà Foscari was founded in 1868 as a high school of commerce and was the first Italian school in this field.

How many canals are there in Venice?

There are over 150 canals in Venice that support the city’s road network. Their depth varies according to the size of the canals: the largest waterways in Venice are the Grand Canal and the Giudecca Canal. These two canals represent the city’s motorways, while the smaller canals replace the streets or alleys of Venice and are less than 5 meters deep.

The Basilica of Santa Maria della Salute is one of the most imposing and beautiful buildings overlooking the Grand Canal. Its construction, dating back to the 17th century, represents an ex-vow to the Madonna after the city of Venice was freed from the plague that killed more than 80 thousand Venetians including the Doge.

Piazza San Marco is certainly the most famous square in the world and is always crowded with tourists. You will be surprised to know that Piazza San Marco is the only real square in Venice, in fact all other similar city places are called campi. Here the most important civic life takes place, the so-called “Venetian salon”. Here are the Doge’s Palace, Piazzetta San Marco, the Basilica di San Marco with its majestic bell tower, the Mint and the Library. Imagine seeing these buildings from a metre below and understanding the size of all these buildings and the Basilica: Piazza San Marco, in fact ,was originally lower, but over time the ground level was raised. After visiting the pulsating city centre of Venice go to the waterfront and start your fantastic guided tour on the Grand Canal.

There is a hidden Venice, far from the queues of tourists, that develops between the minor canals of the city where you can smell the scents and the language of the Venetians. Here, where the waterways tighten and the city acquires that extra charm, you can appreciate another Venice, even more romantic and even more evocative. So leave the Grand Canal and all its beauties behind and complete the experience in Venice with the second part of this tour aboard a small luxury motor boat.

How long is the Grand Canal boat tour with guide?

The boat tour lasts around 1 hour.

Are drinks and snacks included in the boat tour?

No, drinks and snacks are not included in this boat tour.

The health of our community comes first. This experience complies with all the prevention and safety measures.
To learn more