Leaving from Naxos, the sunset cruise will take you along the south or north coast of the island, stopping at the best spot for you to swim, unwind and relax while listening to chill out music and sipping on a glass of wine. And then, just get ready to admire the spectacular colors of the sky and the coast while the sun sinks into the sea. 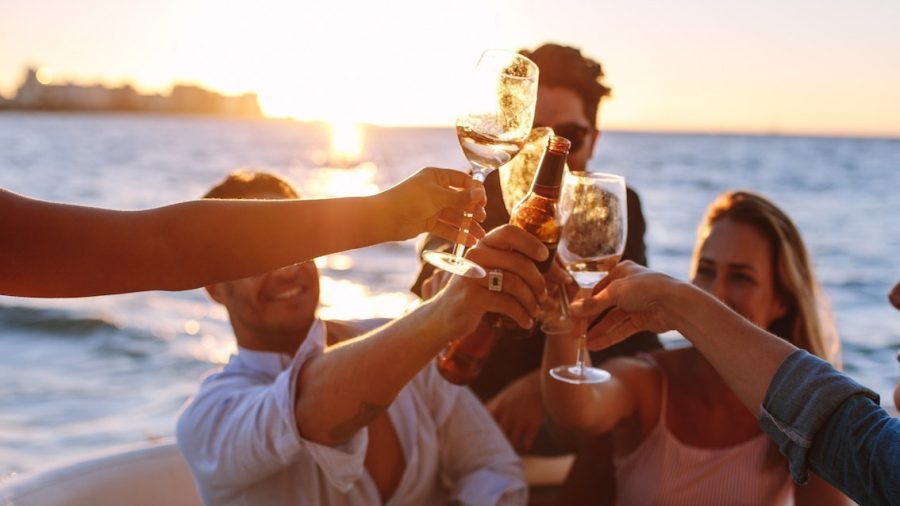 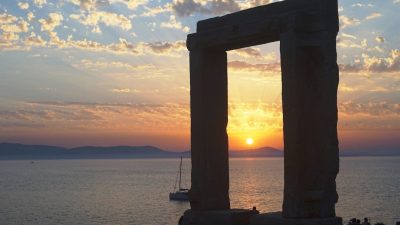 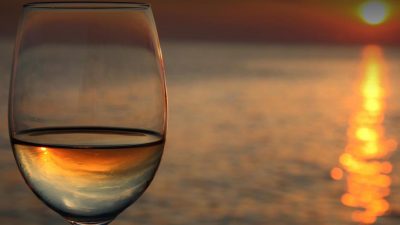 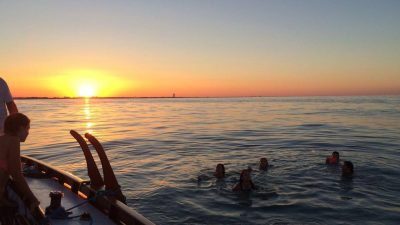 There is no better way to enjoy the spectacular Cycladic sunset than on board a sailing boat in the middle of the Aegean Sea. Leaving from Naxos, the sunset cruise will take you along the south or north coast of the island, stopping at the best spot for you to swim, unwind and relax while listening to chill out music and sipping on a glass of wine. And then, just get ready to admire the spectacular colors of the sky and the coast while the sun sinks behind the neighboring island of Paros.

Tour program of the sunset boat tour in Naxos:

*This experience requires a minimum number of 6 travellers. There is a possibility of cancellation after confirmation if there are not enough passengers to meet requirements. If so, you will be offered an alternative or full refund.

**The itinerary of the cruise is strongly related to the sea and weather conditions: the captain will have a personalized approach, working with the conditions of the day to decide the best route.

Maximum: 18 people on board.

The Cyclades Islands: where are they and which one to choose?

Naxos is located in the middle of a complex of islands particularly famous throughout the world for their beauty: the Cyclades islands. The Cyclades islands are located in the Aegean Sea and are so called because of their circular shape (Greek : cyclades). The archipelago is made up of over two hundred islands of various sizes: the largest, like Naxos, are populated and famous tourist destinations; the smallest are often untouched and without human settlements. The Cyclades Islands are known for their white beaches, crystal clear sea and relaxation: choosing the most beautiful is really difficult. Starting from Naxos with a boat tour at sunset you can surely admire breathtaking and characteristic views of the Cyclades Islands. Among the islands closest to Naxos are Paros and some islands of the Lesser Cyclades: Koufonissi, Schinoussa and Iraklia, coveted for those seeking solitude, privacy and relaxation, surrounded by absolutely wonderful bays.

Naxos: meaning of the name of the largest island of the Cyclades

The etymology of the name Naxos comes from the ancient Greek culture and means “fertile land”. Pindar and Herodotus were the first to speak of the island, describing it as “the oily one” or “the fertile one among the islands”. From here the island was named after the adjective that most characterised it: Naxos. It is no coincidence that the Greek god of wine, Dionysus, was born and raised in Naxos since ancient times, indeed wine is so good that it is considered the nectar of Zeus, the king of the gods. Naxos, besides being the island of wine and oil, is also the largest island of all the Cyclades. The island of Naxos extends for 428 square kilometres, with beautiful beaches both in the southern and northern part, a fairly mountainous inner surface with the highest mountain, Mount Zas, which is over a thousand meters high.

Which boat does the tour of Naxos run on?

For your sunset boat tour from Naxos, you will sail on Naxos Catamaran S/Y Apollon: a brand new luxury catamaran, ideal to see the beauty of the island of Naxos in Greece. Naxos, in fact, is a place that you should visit to enjoy crystal clear waters and white sandy beaches and turn your holiday into an unforgettable experience. With this sailing catamaran we will reach the Small Northern or Southern Cyclades, depending on the weather conditions. In case of bad weather, in fact, the Captain can change the itinerary for the safest and most comfortable route for all guests. An information briefing is given every morning before departure by our crew for travel details and safety on board. Our boat is comfortable and equipped with high safety standards.

What is the sunset aperitif along the coast?

While you enjoy the sunset in one of the most beautiful places in the world, lulled by the crystal clear waters of the Cyclades Islands, during this boat tour you can also enjoy a delicate aperitif on board made of fresh fruit and wine. Naxos is the land of the nectar of Zeus, the wine considered among the best in Greece, the result of an ancient and traditional local production. But Greece’s fruit is also an ambassador of the country’s gastronomy around the world: like the crunchy apples of Zagora or the small, sweet apples of Firiki, or the green, sour apple of Tripoli. But also dried white figs, oranges from Crete, sultanas from Zakynthos, broad beans and tomatoes from Santorini and succulent peaches from Macedonia.

What is the Portara: history and myth

The Portara of Naxos is the gate to an unfinished temple begun around 550-530 B.C. by the tyrant of Lygdamis. The king, however, was defeated by the Spartans before the temple was completed. According to the myth, the temple was erected in honour of Apollo, the god who was in Delos, right where he looks at the door; but there is another hypothesis that the temple was erected for Dionysus, who found Ariadne abandoned by Theseus right here in Naxos. The Porter is located in front of the port of Naxos and consists of two jambs and a marble lintel that weigh, in total, over 50 tons and probably also because of this heaviness that the door has not been degraded, nor has it been plundered over the centuries by the various dominations. Many people come to visit the Porter, especially at sunset, when the white marble stands out between the blue of the sea and the colours of the sun: this is, in fact, one of the most photographed places in Naxos.

What should I bring with me for the boat tour?

During the boat tour departing from Naxos don’t forget to bring a valid ID or passport and the necessary for a sea bath along the coast of Naxos such as a beach towel, sunscreen, a hat and sunglasses. As we will be sailing in the afternoon hours waiting for the beautiful sunset, remember to bring a windbreaker to protect you from the wind that might rise during the afternoon and a camera (mobile phone or camera) to capture one of the most fascinating and beautiful moments of the whole day: the sunset in Greece.

How long is the boat tour along the coast of Naxos with aperitif on board?

The catamaran experience lasts around 2 hours.

What’s included in the boat experience?

In the catamaran boat tour you will be served fresh fruit and a glass of local wine.

Naxos sunset experience: sailing cruise with happy hour on board