Get the discount immediately using the code YOUKNOW10YEARS

A breathtaking landscape connects the two “pearls” of the Amalfi Coast: Positano, and its beautiful terraces overlooking the sea and Amalfi, with its combination of colors that create a unique spectacle. 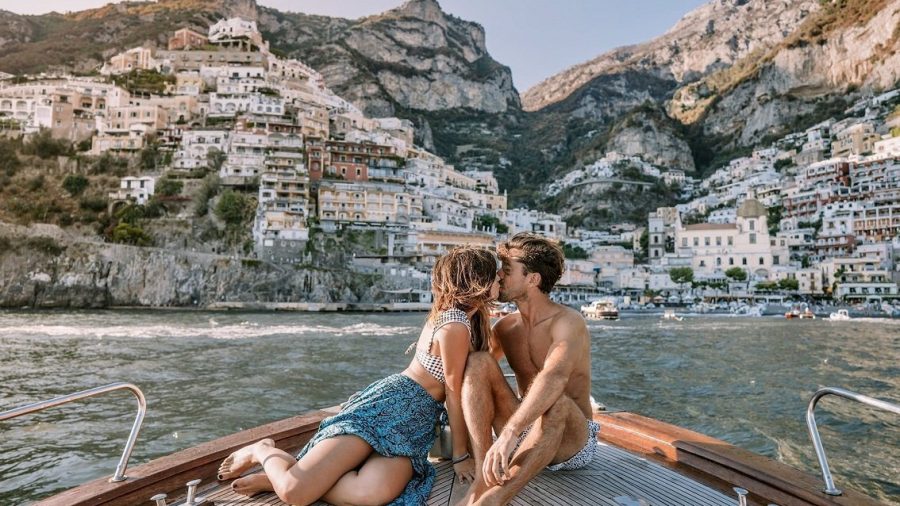 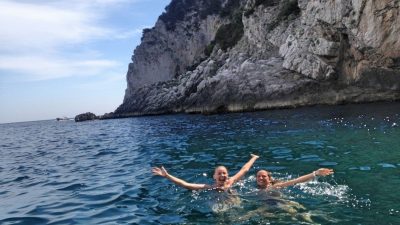 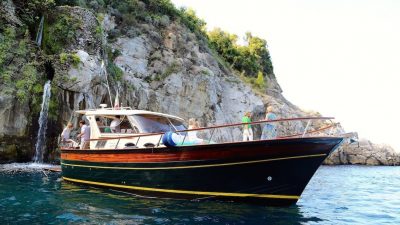 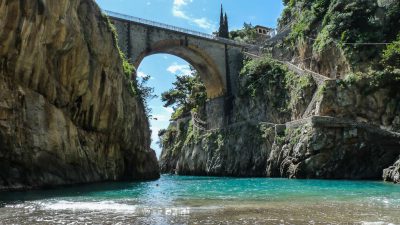 The Amalfi coast is a jewel waiting for you to discover it. A delightful sea ride, on board of a comfortable boat with a small group of 12 passengers, is the best way to admire the show that the coast offers: the sea and the mountain meet each other, creating a breathtaking landscape. You can explore the beautiful towns of Positano and Amalfi, swimming and snorkeling, and relax with an happy hour on the boat at the end of the day. What else? We are waiting for you!

Tour Program of the Sorrento coast and Amalfi coast boat tour from Sorrento:

The price does not include: Entrance fees –  Lunch.

The name Ieranto derives from the Greek “Ieros” or “sacred” : here near Punta Campanella stood the temple of the Goddess Athena and here Homer placed the Sirens who enchanted Ulysse. Today the sacred atmosphere is still breathed walking on waves of rock, in front of panoramic views that open into a sudden blue. The Bay of Ieranto is a strip of land that stretches from the fishing village of Nerano to almost churning out Capri. Ieranto is now owned by FAI, the national fund for the environment, which often organizes guided tours. Access to the area is always free.

Seen from above it looks like a dolphin, in reality Li Galli is a small archipelago formed by three islets that overlook between Capri and Positano. It is currently privately owned and can therefore only be visited by invitation, but the less fortunate can admire it from afar by boat. The archipelago consists of the Gallo Lungo (which is the largest island), the Rotonda and the Castelluccia. The whole area is part of the marine protected area of Punta Campanella. It is also known as the Sireneuse because according to legend it was once inhabited by mermaids, who enchanted the sailors in transit with their songs. Always according to mythology only two ships were able not to sink against the rocks: that of Ulysses whose story is told in the Odyssey of Homer and that of the Argonauts who saved themselves thanks to Orpheus. It is also said that the name Li Galli derives from the iconography of the sirens, that, in archaic greek art, are not half woman and half fish but rather half woman and half bird. The archipelago was discovered in the 1920s by Russian dancer and choreographer Massine. At that time Li Galli was covered by Roman ruins and was unhihabited and he made a villa there thanks to the architect Le Corbusier who also built a theatre. On his death, Li Galli was bought by a Russian dancer, Rudolf Nureyev, who had the dream of creating a dance school. His premature death prevented him to realize this dream and in 1988 the island remained uninhabited again. Now it is owned by an entrepreneur from Sorrento, who rents the residences on the island for private parties or receptions.

Positano, the place where like the mermaids hosted on the island of Li Galli, never ceases to seduce those who come here. Positano seen from the sea looks like a shell, streaked with different colours. From the green of the Lattari Mountains, which crown it, to the white pink and yellow of its Mediterranean houses, the silver grey of its pebble beaches and, finally, the blue of its sea. On the coast of Positano there were beautiful villas during the Roman period, as evidenced by some remains at the Church of the Assumption. When in 1260 it was sacked by the Pisans, it changed its town-planning to a defensive end, becoming similar to Amalfi with narrow streets, houses climbing on the rock fortifications and watchtowers. From every point of the village you can admire the multicoloured majolica dome of the Church of Santa Maria Assunta, which houses the icon of the Black Madonna dating back to the eighteenth century. Curiosity: the name of Positano comes from the legend. It is said that the painting of the Madonna was on board a ship, which, because of the good wind, could not in any way resume the sea. The sailors at one point heard a voice saying “pose,pose” or “stop there, in that place” and that was how they approached the shore. The people of Positano, who gave the name to the town from this event, took the picture and brought it to the Church of San Vito, patron Saint of Positano, which no longer exists since ‘600. They left it there but in the morning miraculously the painting disappeared and was found near the sea, on a “mortella” tree. Thinking of a miracle because the painting had arrived in that place alone, the people of Positano began at that point the construction of the new Church dedicated to Mary of the Assumption.

The village of Praiano, scattered between the coast and the mountain, offers inviting and peaceful beaches and above all here is the only beach of the Amalfi Coast illuminated by the sun until sunset. Bordering Praiano is the village of Furore, with its famous fjord where every year, on the first Sunday of July, there is a spectacular diving competition. The Fjord of Furore is one of the most fascinating places on the Amalfi Coast. It consists of a deep crack in the rock and is crossed by the Schiato stream that flows fast from the Agerola plateau. These deep coves and overhanging rocks are typical of the landscapes of Northern Europe and also Furore takes on the typical connotations of those fairytale landscapes, but blending them with Mediterranean smells and atmosphere. As in every place of enchantment, here too there are legends. Local legend has it that the Devil himself went to Furore and the inhabitants, who did not like his presence, proved to be inhospitable with him. The devil then going away, thought of leaving a “memory” near Agerola, but by mistake he cleaned himself with the most aggressive of nettles and escaping screaming furiously slammed his feet marking that stretch of road. Historians say, however, that the town, formerly called “Terra Furoris”, takes its name from the sound of waves that crash furiously on the rocks of the small fjord. In the past the Fjord of Furore was home to factories where paper was processed and, going down to the Valley, there is still the old spreader where it was dried. Since 1997 it has been included in UNESCO as a World heritage site and has also recently joined the club of the “most beautiful villages in Italy”.

According to a legend, the town takes its name from Amalfi, a nymph loved by Hercules who was buried here at the behest of the Gods. Surely inhabited by the Romans, who had fled to the Lattari Mountains to escape the Germanic and Lombard invasions, it was a camp for the defense of the Byzantine Duchy of Naples. The city enjoyed a privileged relationship with Byzantium for the ability of the Amalfi people in maritime trade. The unique architecture of white houses, the mild climate almost all year round and the characteristic craft shops make it a perfect tourist destination chosen by thousands of tourists. Amalfi is a city of about 7000 inhabitants, rich in history and art and gives its name to the Amalfi Coast, famous throughout the world and since 1997, declared a UNESCO World Heritage Site. Among the most famous monuments there is certainly the Cathedral of Amalfi in Arabic-Sicilian style dedicated to St.Andrew, patron Saint of the city. The Dome was built next to the oldest Basilica, which in turn was built on the ruins of a temple. The interior of the Dome, with its coffered ceiling, is characterized by a central nave and above, on the altar, there is the canvas of the Martyrdom of St.Andrew. Inside the crypt is the body of St. Andrew, the first disciple of Jesus and patron Saint of Amalfi. The Cloister of Paradise is part of the Cathedral of Amalfi, in fact from the atrium of the latter you can access one of the most famous and interesting buildings of the entire Amalfi Coast. Its construction dates back to the years between 1266 and 1268 as a cemetery for the illustrious and well-off citizens of the noble families of Amalfi and housed their sarcophagi. Amalfi and the Amalfi Coast await you with their pastel-coloured villages overlooking the blue, the inlets, the fjords, the mountain paths with unforgettable views, art, history and traditions and of course food and wine.