Take in the highlights of Croatia’s Dalmatian coast on this boat tour from Trogir. Marvel at natural wonders such as the Blue Cave and the Monk Seal Cave on Biševo island; explore the village of Komiža, swim and snorkel in Stiniva Cove and Budikovac Island and, finally, enjoy the quaint coastal town of Hvar. 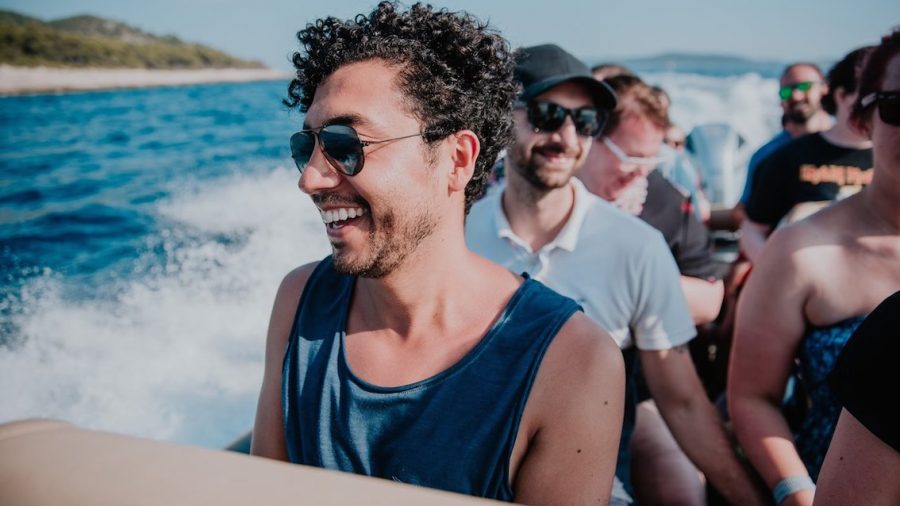 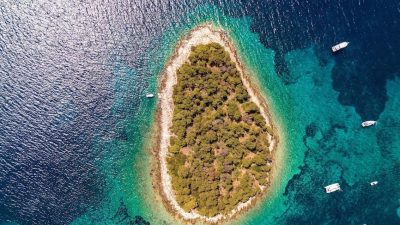 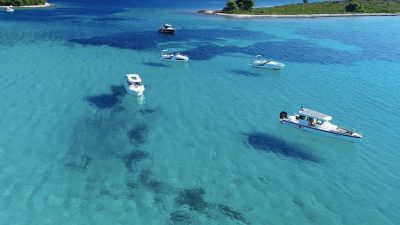 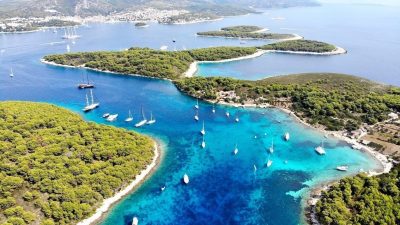 Take in the highlights of Croatia’s Dalmatian coast on this small group boat tour from Trogir. Set sail across the Adriatic and marvel at natural wonders such as the Blue Cave and the Monk Seal Cave on Biševo island; explore the charming seaside village of Komiža, before swimming and snorkeling in Stiniva Cove and Budikovac Island. Conclude your tour with some relaxed free time in the quaint coastal town of Hvar before returning to Trogir.

The island of Biševo (Busi)

The island of Biševo is located four nautical miles from Komiza and is famous for two main tourist attractions: the Blue Grotto and the Grotto of the Monk Seal. Every year thousands of people come to this small island to discover its natural sea caves and clear waters. There are also sandy and beautiful beaches where you can swim on the island of Biševo. Did you know that during the rest of the year less than 20 people live on the island of Biševo? You read correctly! Biševo was the oldest inhabited island in Croatia, but its geographical position makes it very exposed to high winds and high sea in winter, so much that the inhabitants moved to nearby Komiza and return to Bisevo in summer to tend their vineyards or fish. A small island in Croatia, as small as it is precious, where the wine produced is excellent and rainwater is the main water supply for all of Biševo.

Why is it called Monk Seal Cave?

The Monk Seal Cave in Croatia takes its name from the fact that in the past it was chosen by the monk seal as its own refuge. In fact, although it is very much visited, together with the Blue Grotto (Modra Spilja), the Grotto of the Monk Seal (Medvedina) is much more intimate. The Monk Seal Grotto is 160 meters long and, seen from outside, it almost looks like a secret entrance, tall and dark, ending with a small pebble beach that is absolutely worth a visit.

Modra Spilja is the Blue Grotto of Croatia. It takes its name from the fascinating chromatic phenomenon that you can admire inside this famous natural cavity. The Blue Grotto is located in the small bay of Balun, on the island of Biševo, accessible from Trogir (or Trau). This cave has been known since ancient times by local fishermen and was then opened to the public only in 1884 when an access was made with the explosion of a dynamite. In this way an access for small boats was created and direct tourism started to this natural beauty that has little to envy to the most famous Blue Grotto of Capri. The blue effect of the Blue Grotto comes from an opening below sea level from which sunlight enters and creates these spectacular reflections.To access the Blue Grotto you have to rely on expert boatmen who know how to manoeuvre the small boats to get in and out the opening in the artificially created rock. When you are inside the Blue Grotto, you will feel like you are in a different dimension.

The village of Komiža( Comisa): what to do and see

Once we arrive on the island of Vis, we will have free time to visit Komiža. Komiža (or Comisa) is a lovely fishing village on the island of Vis (Lissa) whose history is closely linked to fishing: keep this in mind when you want to decide what to do and what to see in Komiža. In fact, in this village there is the Fishing Museum which exhibits nets and various tools, including the famous Falkuša. The Falkuša is a special boat, which is able to turn into a fishing boat only after having reached its destination very quickly. This boat has become the symbol of the village of Komiža, so much so that every year on December 6th a Falkuša is set on fire in honour of its patron saint: St. Nicholas. The town of Komiža is also linked to the legend of the small Renaissance church called Gusarica, which is located on the town beach. It is said that in the 16th century Komiža was looted by pirates who stole the painting of the Virgin Mary. The pirate ship, however, was sunk during a storm and with it the loot, but the painting of the Virgin Mary was saved and was brought back to the beach by the waves. Since then, the inhabitants of Komiža rebuilt the church, which had been set on fire by looting and called it Gusarica, which means “the pirate”. The Island of Komiža has a very special, typically Mediterranean and very relaxed atmosphere: you can discover its beautiful sandy and pebble beaches, its hidden coves, or have a coffee on the promenade.

The Blue Lagoon of Budikovac

Welcome to the Blue Lagoon, a pristine place on the Island of Budikovac, Croatia. To reach this island you can only use private boats, so a boat tour with this stop is the best way to visit the Blue Lagoon. Do not forget that the Blue Lagoon is protected from mass tourism and is inhabited all year round by one person. The island is surrounded by particularly crystal clear waters: Croatia’s Blue Lagoon with its colours and clear waters is definitely the perfect place to snorkel and admire the seascape.

Why are they called Pakleni islands (or Spalmadori islands)?

The Pakleni islands are a group of twenty islands and rocks in front of the town of Hvar. These islands have various nicknames: for example, due to their location, the Pakleni islands are also called “the Hvar rocks” by the inhabitants of the island of Hvar. Some Croatians call them “hell islands”, because of the assonance between the word pakleni and the word hell (pakao) in Croatian. But in reality these islands are paradisiacal islands that take their name from a particular resin used in the construction of ships, the only means of transport for the islands. Most of these islands are still unexplored and untouched and, for this reason, are very fascinating especially for sailors. During the boat tour to the Blue Grotto, Hvar and the 5 Pakleni islands, you will see places that are still pure, covered with gravel and a thick forest of pine trees that make their shade. The waters of these islands are spectacular, it will not be difficult to meet some dolphins or sea turtles: the advice is to snorkel and swim in the crystal clear sea.

What to see in Hvar (Lesina)

If you want to know what to see on the island of Hvar, this boat tour also provides enough free time to enjoy this beautiful city. You should know that the island of Hvar in Croatia is located in Central Dalmatia and is the fourth largest. In Hvar, the town on the island of the same name, history and landscape coexist in a unique way. Among the things to see once you get to Hvar is the Franciscan Monastery, which you can reach by walking along the coast of Hvar’s main square. Inside there are Greek-Roman and Venetian coins, an atlas by Ptolemy, various liturgical accessories, as well as paintings by Venetian painters such as Francesco Santacroce and Palma Il Giovani and the magnificent painting of the Last Supper (2 x 8m). Inside the Convent of Hvar you can also admire a very old cypress tree, more than 300 years old. The monastery is open from 10 to 12 and from 17 to 19 in summer. But for those who like to stay in the open air and enjoy the landscape, the Medieval Castle of Hvar is another must-see: it is a wall that runs through the town offering a priceless view of the whole island. Another point of interest in Hvar is St. Stephen’s Cathedral, one of the most beautiful monuments in Croatia. Not far from the Cathedral, you can also visit the Arsenal, where the ships of the Venetian Republic were repaired and then the theatre of the city which was built in the 17th century: it is probably the first popular theatre in the whole of Europe.

How long is this boat experience to thre Blue Grotto, Hvar and 5 islands from Trogir?

The boat tour lasts around 12 hours.

On board there is the opportunity to use the restroom, as well as public facilities during the stops.

Do I have some time to explore on foot?

Yes, you will have free time to visit Komiza on the island of Vis and Hvar.

Why is the itinerary flexible and not fixed?

The itinerary varies according to sea and weather conditions. For your safety on board, the captain will decide the best route to take every day by evaluating the sea and wind conditions.

The health of our community comes first. This experience complies with all the prevention and safety measures.
To learn more